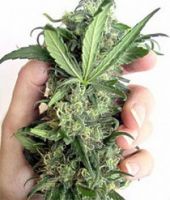 There has long been a controversy over the causes of marijuana abuse. Historically, it was thought that marijuana abuse was caused by lack of willpower, poverty, moral weakness, mental illness, genetics, family socialization, anti-social personalities, and societal problems. The truth is that all drugs affect a "reward mechanism" in the brain. Each time someone uses marijuana they feel good, which makes them want to use the drug again. The desire to feel good helps explain part of why people abuse this drug.

Recent scientific research shows that characteristics of the individual, rather than of the drug, play a dominant role in the causes of marijuana abuse. The social and psychological maladjustment that characterizes most frequent drug abusers precedes the first drug use. One study that tracked children from an early age to adulthood identified predictors of future serious drug use that could be identified in children's behavior as early as age seven.

A study based on a sample of 20,291 individuals drawn from the community at large found that more than half of those who met the medical criteria for diagnosis as drug abusers also suffered from one or more mental disorders at some point during their lifetime. This included 28% with anxiety disorders, 26% with mood disorders (depression), 18% with antisocial personality disorder, and 7% with schizophrenia. Some had multiple disorders. The prevalence of mental disorders varied with the drug being abused, ranging from 50% of marijuana abusers to 76% of those who abused cocaine. Almost half of the drug abusers also suffered from alcohol abuse at some point during their lifetime.

Marijuana abuse causes changes in the users brain. The main chemical messenger involved in the brain's reward mechanism is dopamine. Each time the person uses marijuana they feel good, which makes them want to use it again. Over time, changes in the brain occur (e.g., less dopamine is produced) which lessens the pleasurable effects of the drug and larger amounts are needed to get the same feeling.

Many people believe in the existence of an "addictive personality", and blame it as one of the causes of marijuana abuse. While this condition may exist, evidence shows that an "addictive personality" is a result, and not a cause, of marijuana abuse. An "addictive personality" is often associated with poor self-esteem, trouble relating to people, a low tolerance for frustration, and a desire to escape reality. Many people abuse drugs such as marijuana following accidents, failures, breakups, losses of self respect, giving up on life goals, job problems, and the list goes on. What is common to all these pains and problems is the ABSENCE OF a better solution and an inability to resolve the original problem. Factually, what's missing was a real accessible solution to the problem in the first place.

There are several common factors that are associated with the causes of marijuana abuse. These factors include: