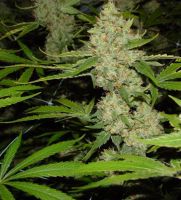 The User's Brain and Chronic Marijuana Abuse:
Among a long-time chronic marijuana abuse group in Costa Rica, researchers found that the people had great trouble when asked to recall a short list of words (a standard test of memory). People in that study group also found it very hard to focus their attention on the tests given to them.

THC affects the nerve cells in the part of the brain where memories are formed. This makes it hard for the user to recall recent events (such as what happened a few minutes ago). Not surprisingly, it is hard for one to learn while they are high, because a working short-term memory is required for learning and performing tasks that call for more than one or two steps.

As people age, they normally lose nerve cells in a region of the brain that is important for remembering events. Chronic marijuana abuse causes repeated exposure to THC and may hasten the age-related loss of these nerve cells. In one study, researchers found that rats exposed to THC every day for 8 months (about 1/3 of their life span), showed a loss of brain cells comparable to rats that were twice their age. It is not known whether a similar effect occurs in humans. Researchers are still learning about the many ways that chronic marijuana abuse could affect the brain.

Chronic Marijuana Abuse and Mental Health:
A number of studies have shown an association between chronic marijuana abuse and increased rates of anxiety, depression, suicidal ideation, and schizophrenia. Some of these studies have shown age at first use to be a factor, where early use is a marker of vulnerability to later problems. However, at this time, it is not clear whether marijuana use causes mental problems, exacerbates them, or is used in attempt to self-medicate symptoms already in existence. Chronic marijuana abuse, especially in a very young person, may also be a marker of risk for mental illnesses. Mental illnesses may include addiction stemming from genetic or environmental vulnerabilities, such as early exposure to stress or violence. At the present time, the strongest evidence links marijuana use and schizophrenia and/or related disorders. High doses of marijuana can produce an acute psychotic reaction. In addition, use of the drug may trigger the onset or relapse of schizophrenia in vulnerable individuals.

The THC (the main psychoactive substance found in the cannabis plant) in marijuana is strongly absorbed by fatty tissues in various organs. Generally, traces (metabolites) of THC can be detected by standard urine testing methods several days after a smoking session. However, in heavy chronic marijuana abuse cases, traces can sometimes be detected for weeks after they have stopped using marijuana.